"We've been trimming our nails wrong for more than 100 years"


"Trimming your nails sucks, and it's not your digits' fault. Technology is to blame. Nail clippers. Blech. With a one size fits all design, it's impossible to get your whole nail in one clip. And curling over the bathroom bin doesn't make us any more likely to keep the floor clean of our cast offs.

And yet, for more than a century, we've been keeping our nails under control using the same little imperfect machine. How is it that this crummy design won us over?

The device started wriggling its way into our hands and hearts in the late 19th century. Early clippers looked like fat tweezers and worked when you squeezed them. Well that sounds convenient! Inventors started improving: in a patent from 1881, the mechanical nail-biter gets a lever to add vim to your trim. Fancy! This same device also worked as a glove-buttoner and was designed to be dangled from a belt or watch chain as if clipping your nails was something that didn't gross out other people.


But the nail clippers didn't go gangbusters at the time. Part of the reason was that manufacturing them was expensive. So production never really got far off the ground.

The nail clipper's heyday really came in the 1940s when William E. Bassett of Connecticut made the apparatus cheaper and a bit easier to use. Improved manufacturing techniques, gleaned from when his company was making artillery components for the Army, allowed Bassett to produce a clipper on the cheap. And some tiny design tweaks make it easier on the user. Those two little nubs that keep the arm from swinging out of place while folded? That was a Bassett addition. He also gave the lever a little ripple designed to better catch the thumb. People picked up that design and haven't put it down since.

Today they're so cheap they're almost disposable. Bassett's TRIM clippers—or some other nearly identical model—will set you back only about a buck or two. Perhaps our problems with nail clippers pass with the action, or perhaps they're so cheap that we don't feel like we have the right to complain. Whatever it is, the nail clipper could still stand to do a better job.

Instead of spraying shards of cast off nail, they should trap the shrapnel, or deposit it neatly somewhere. According to Andrew Johnston, the owner of Klhip, a company that recently reimagined nail clipper, the key to proper cutting is sharpness. The cutting edge of the traditional model "crushes and snaps" the nail. He likens the process to chopping carrots. "If you apply pressure with a dull blade, the carrot goes flying," says Johnston. "But if you have a sharp knife, the carrot slices either stick to the knife or fall on the cutting board." Storing the average clipper next to the sink or at the bottom of a makeup bag will cause its blade to quickly dull. 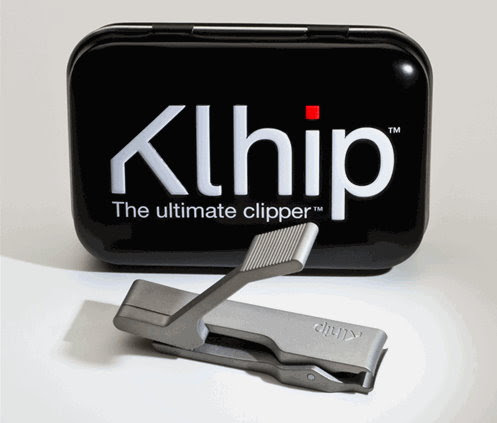 The clipper's thin profile also contributes to its unenthusiastic chopping technique. The reason is that the slim parts—designed so that the clipper is not a burden to carry around—have a lot of give, so the jaws don't meet with quite as much oomph as if the parts were more rigid.

Johnston has solved this problem by making his nail clipper out of injection-molded stainless steel that's been heat treated to make it extra hard. The blade on his clipper stays sharper for longer and it doesn't have nearly as much bend. But in order to get better performance, you're going to have to shell out $50. Sure, Johnston's model is a better ergonomic design, with the arm connection kicked to the back and extending forward, but the price point is too high for most of us to even consider.
What we really need is the 2012 version of a Bassett moment—give us all the nail-cutting good stuff, but at a price that will work for the masses.”"